If you have a baby in your family and are looking to adopt a dog, chances are your google search is suggesting you to adopt a boxer. These loving and puppy-eyed dogs are descendants of the  very hardworking war dogs of the Assyrian empire from 2500 BC. Over the years the breed was bred down by German dog lovers and a breed similar to what we now know as the boxer breed was created. These hunter dogs were called the Bullenbeisser (“bull biter”). As hunting became less and less popular, the “bullbiter” was bred with smaller mastiff dogs and what was created was the modern boxer dog. They typically come in brindle, fawn and sometimes white colours. Markings such as a black mask, black mask with white markings and white markings are common. The chiseled head is in proportion to the body and skull with a broad, blunt muzzle which is the distictive feature of the Boxer. Due to their short snouts, they tend to snore quite a bit though!

The average life expectancy is 10-12 years of age. Males weigh in at 65-80lbs where females are commonly about 15lbs smaller than males.

Why the name ‘boxer’?

The name “Boxer” refers to the way the breed spars, like a prize fighter with their front paws when playing or defending themselves. But don’t let the name fool you. They are kind and gentle dogs who want nothing but attention.

They are known for their loyalty, affection, intelligence and work ethic. They are happy, upbeat, playful and love being part of a family with children. Socializing and exposing your boxer to many people and animals when they are young will ensure that they grow up to be a well rounded member of the family who takes their job of guardian seriously and responsibly. 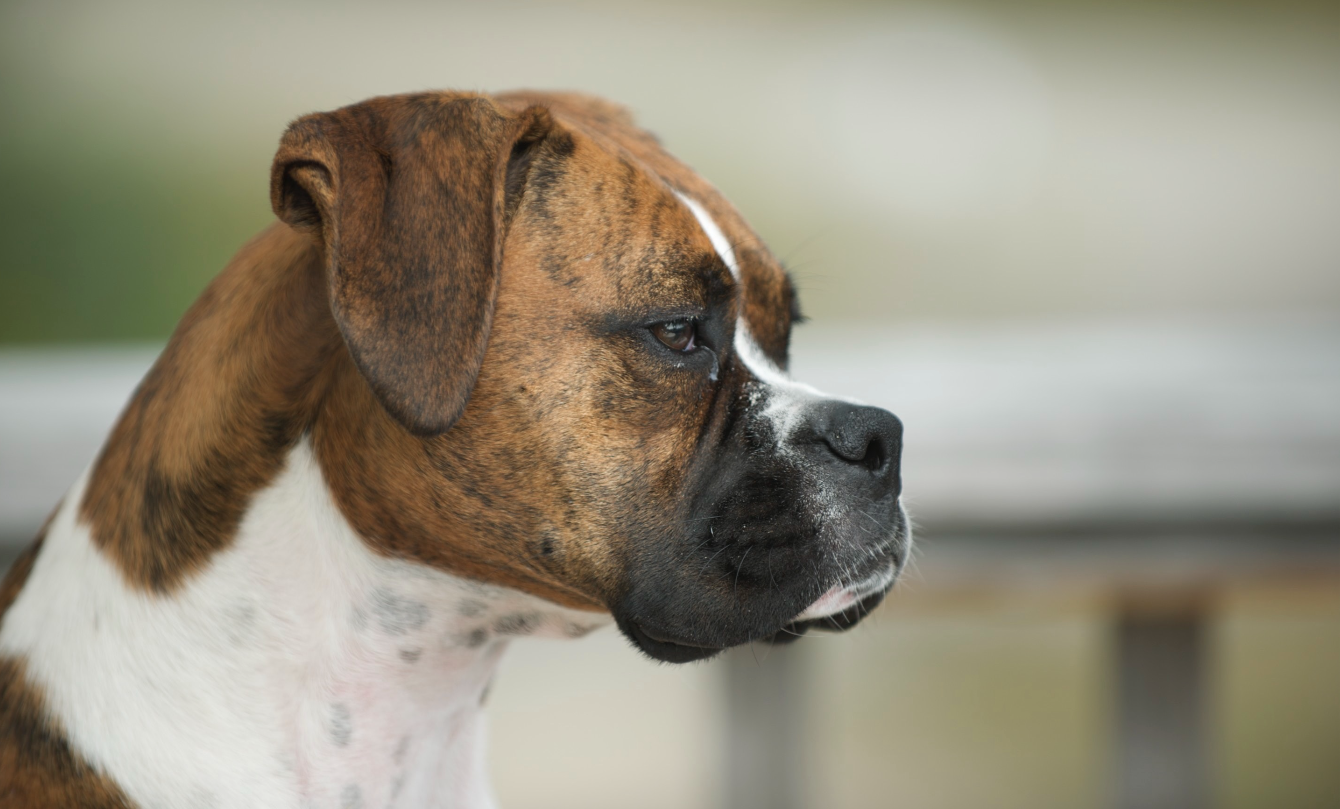 Do boxers need lots of activity?

Life with a Boxer can be fun, entertaining and fulfilling. They are great students are learn basic commands very quickly. They are high energy dogs and require a lot of exercise so an active family will find great companionship with a boxer!

How often do boxer dogs need to visit the groomers?

Due to their short, tight fitting coat, they don’t require a heavy amount of grooming. Using a short curry brush is the best as it helps to remove the loose hair as well as massage their skin keeping it healthy and shiny.

Every few months, it’s good to bathe them with a mild dog shampoo. Do not bathe too frequently as it can dry out their skin and cause itching.

Generally a boxer dog will have good teeth however, some are prone to have issues that you can keep at bay by brushing daily. Bailey the boxer posing with her NHV supplements 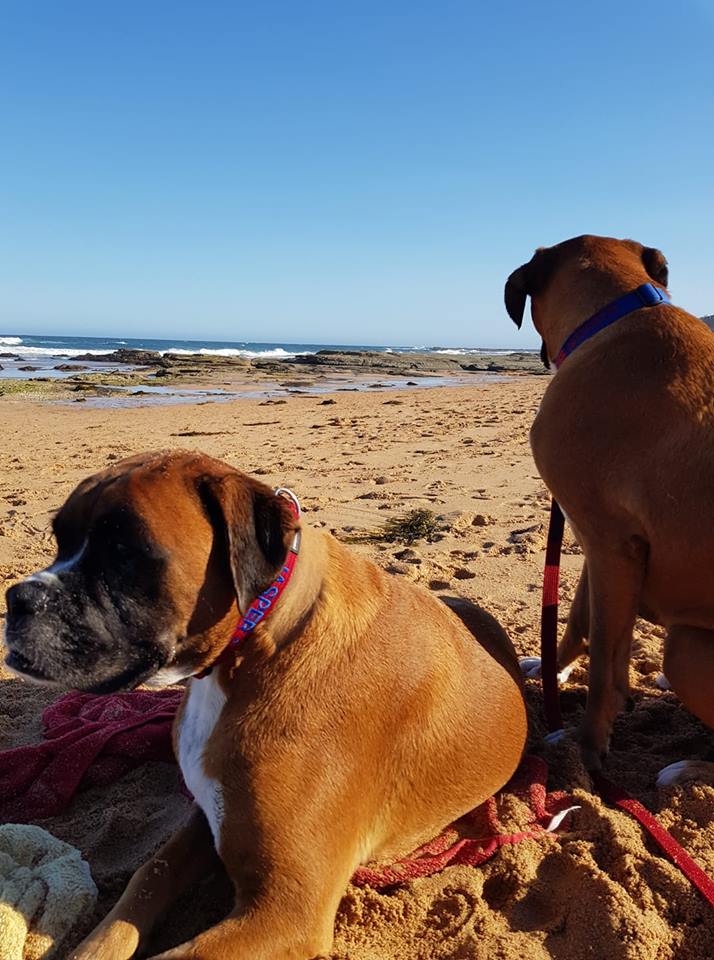 “Our boxer is fighting cancer and we firmly believe the Cancer Fighter Kit is helping him in that fight! Thank you NHV…from Australia” ~ Jen Ross-king

Common health problems in boxers and what you can do to prevent them?

Boxers are prone to different ailments due to their genetics. Here are some that we see most frequently at NHV.

Lymphoma, Mast Cell Tumor and Hemangiosarcoma are the three most common cancers seen in boxers. Symptoms vary according to the kind of cancer but changes in energy level and appetite should be paid attention to. Treatments such as chemotherapy, surgery, radiation and prescribed medications are the most common. Although there is not much known about the root cause of these cancers, in boxer dogs it can be due to a genetic predisposition. You can do your best for prevention through a high quality diet, omega 3 fatty acids and by including NHV supplements such as Pet Cancer Immunity Plus kit in their diet proactively.

Bloating is common in dogs with deep, narrow chests like boxers, bull dogs and Great Danes. The stomach fills with gas and twists over on itself. This cuts the blood supply to abdominal organs and if left untreated, this can quickly become fatal. Preventive surgery where the stomach is tacked down/sutured in place is highly recommended. It therefore becomes important to be careful with their diet and avoid feeding them prior to exercise or shortly after. Always give your boxer dog time to relax before and after meals.

Cushing’s Disease is caused by a malfunction of the adrenal glands causing over production of glucocorticoids. It develops slowly and early signs often go undetected. Symptoms such as excessive drinking, panting, urinating and increased appetite are common. Reduced activity levels, a visible potbelly, thin skin and hair loss are advanced symptoms. Regular veterinary visits and looking out for symptoms will help with early detection.

Multiple types of heart disease such as murmurs, dilated cardiomyopathy and congestive heart failure are a few that Boxers are genetically prone to. With regular veterinary visits, dental care and weight control you can help prevent heart disease. The NHV Heart Health Kit contains supplements for prevention and support of different heart conditions.

Wobbler’s disease causes a wobbly, drunken gait as a result of a narrowing of the vertebrae in the neck that pinches the spinal cord and associated nerves. The nerves, when pinched, cannot send adequate signals to the brain causing the pet to be unable to feel their feet. Treatments such as neck braces, rehabilitation programs and surgery are most common. NHV Turmeric helps support the nervous system and also supports healing as an anti-inflammatory.

When the intestinal lining of the GI tract becomes inflamed and thickened it affects the ability to absorb nutrients properly. Chronic diarrhea and vomiting, weight loss and skin issues are common. Treatment ranging from a change in diet, anti inflammatory drugs, antibiotics and vitamins are the most popular. NHV’s IBD Kit helps to aid in the evacuation of bacteria and ease inflammation of the GI Tract.

Boxer dogs are adorable goofballs and their humans often call them the best anti-depressants out there. They know when to cheer you up and when to just be your comfort cushion. They mold their energy levels according to the human or pet they are interacting with. With a healthy and well-balanced diet, regular heart health check ups and some holistic supplement like NHV’s, your boxer dog can live a happier and healthier life. Feel free to get in touch with an NHV Pet Expert to talk about the best preventative care for your boxer.