Home » All Articles » Inspiring Pet Tails » NHV Helped My Cat Jax With His Hyperthyroidism and Liver!

NHV Helped My Cat Jax With His Hyperthyroidism and Liver! *Thank you Linda for sharing Jax story of hyperthyroidism in cats and his success using NHV remedies with us!

*”I became aware of NHV Natural Pet Products this past spring, when, on Valentine’s Day, my 14-year-old hyperthyroid cat, Jax, accidentally fell from the half-wall of my 2-story condo, and dislocated his hip when he landed on his feet.

When I rushed him to the emergency vet, they tried to re-set his hip, but it would not stay in place. My vet suggested surgery, a femoral head ostectomy, to remove the knobby end of the bone, which was grinding against Jax’s pelvis. She said that because of his hyperthyroidism, he would be a higher risk patient to anesthetize, but she thought he was tough enough to make it through the surgery.

My Jax is a tough, beautiful Norwegian Forest Cat who, when healthy, weighed between 15 -17 pounds. At the time he fell, he was 10 pounds, very skinny, and on methimazole gel, since he fought being pilled like the devil. We rolled the dice, and Jax made it through the surgery, but the anesthesia took a toll on him.

He had diarrhea, and loss of appetite. I switched him to boiled fresh chicken, and some canned Hill’s post-op recovery food. He was recovering slowly over the first month, and then suddenly became lethargic. After blood tests revealed his liver enzymes and his thyroid levels were climbing, my vet recommended milk thistle, or better yet, Denamarin, which contains both milk thistle and Sam-E, both of which are beneficial to liver function. But Denamarin only comes in pill form, and I did not want to have to traumatize and fight Jax every day with multiple pill treatments.

So I searched online for liquid milk thistle, and found NHV Natural Pet Products. NHV had the biggest bottle for the best price, so we started down the naturopathic road. It worked.

Jax’s liver enzymes returned to the normal range. But his thyroid numbers were still climbing, and he was continuing to lose weight, ounce by ounce. He went down to 8.7 pounds, and had almost no muscle tissue left. I went back to the NHV website and found Resthyro, and bought a bottle, thinking it might be my last ditch effort to help my buddy Jax. You see, Jax’s hip was healing, with new scar tissue creating a tough new connection to his pelvis, but without that muscle mass around his femur, he had no strength in his leg, and was limping badly, and in considerable pain. I cried when I even looked at him, because I thought I was going to lose my best buddy.

Then I started giving him the Resthyro in April. I also started feeding him exclusively high protein wet cat food, boiled chicken, and fish. Within a week I saw a difference in his energy. His appetite improved, and he started walking around the house more. His eyes seemed brighter, and he came to me for cuddles, instead of me bothering him.

Over time, his pain diminished, to the point where he no longer needs any pain medication. His coat became gorgeous, just like it was when he was a young, healthy cat! He gets a shaving twice a year, because his long, thick coat mats easily, and it eliminates the hairball problem, but the vet usually has to sedate him for the groomer, which means he has to have blood tests done first.

In late August he got his “lion” haircut. And LO! AND BEHOLD! ALL of Jax’s blood test results were NORMAL!!!! My vet was SO pleased, and told me to keep on doing whatever it is I am doing for him! I told her about the RESTHYRO, and she took notes for future reference! It is now barely 5 months since I started him on the RESTHYRO. He has gained some weight, but the incredible thing is I am beginning to see muscle mass increase in his affected leg!!!

He is lately jumping up onto and off of things I never thought he’d be able to again (but NOT the half-wall, thank goodness!) His leg is sturdier and getting stronger every day. Jax is still on the methimazole gel, but the side effects have even lessened. I am amazed, and truly thankful for this product, and have just ordered the RESTHYRO Kit, which includes TURMERIC drops for additional health benefits. My sweet Jax has made it through the toughest time in his life, thanks to a WONDERFUL vet, RESTHYRO and NHV Natural Pet Products. 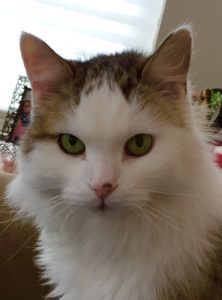 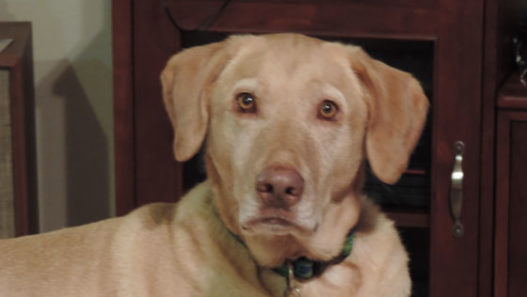 NHV Remedies Help Ike On His Road To Recovery