Home » All Articles » Pet Care Tips » The Giardia Parasite in Dogs: What You Need To Know

The Giardia Parasite in Dogs: What You Need To Know Pet Care Tips 3 min read

Giardia can be transmitted to humans as well as our Fury friends, but let’s talk about our pet’s shall we!

Giardia is a simple one-celled parasitic species that inhibits the intestines of mammals, amphibians and birds. For your dog to be infected, your pet has to ingest the parasite to get Giardia.

Where is Giardia found?

Giardia can be found in many different variables including, drinking contaminated water, eating infected feces or something else that has been contaminated, like grass or simply by chewing on a stick. As any pet parent knows, dogs love playing and putting everything in their mouths and this means that there are plenty of ways for your pet to pick up this parasite in their environment.

What are the signs and symptoms of Giardia?

The Giardia symptoms in dogs can vary and can be asymptomatic but generally, it causes diarrhea and weight loss. The parasite leads to the inability of your dog to properly absorb nutrients, water, and electrolytes. The diarrhea can be intermittent or on a regular basis. It can be presented with mild or explosive diarrhea, soft stools with mucus and can have a very foul smell to it. Puppies, senior dogs or dogs with a compromised immune system are particularly susceptible to this parasite and a failure to have this properly diagnosed and treated can, in rare cases, cause death. 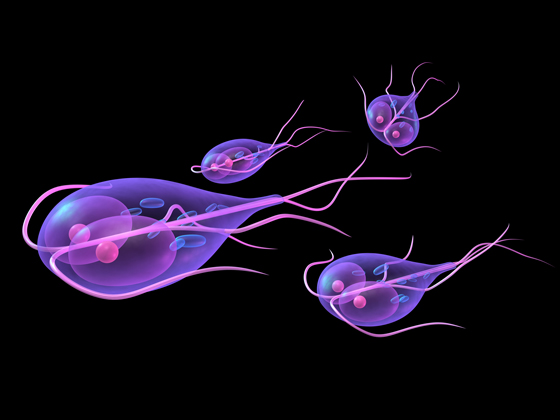 This is what Giardia looks like under a micrscope, they might look cute but these little guys can cause havoc for your dogs or cats.

How is Giardia tested?

Generally, testing for Giardia requires a fecal sample that can be done right at the Veterinary clinic. Unfortunately, because Giardia is an elusive parasite (hard to find and identify), the cysts are shed only intermittently from the gastrointestinal tract of an infected pet. A single fecal sample has only a 70 percent chance of detecting an infection. Having a fecal done within 3 consecutive days increases the chance of detection to greater than 90 percent. There are other tests such as the giardia ELISA that can be used with a routine fecal sample to increase the likelihood of a diagnosis to about 95 percent.

Your vet may prescribe pharmaceuticals to help rid your pet’s body of Giardia. Since pharmaceuticals can be hard on a pet’s system (gi issues, depression, lethargy, and anorexia), it’s always a good idea to use natural, nutritive supplements to provide extra support the body needs.

How can NHV products help with Giardia?

Inulin-PK,  is a gentle but effective herbal formulation that helps rid the body of parasites like Giardia. It contains a blend of nutritive, anti-inflammatory herbs that also help protect the liver and soothe the gastrointestinal tract as well as help boost immunity. NHV Inulin-PK can be used 3 times a year as a natural preventative parasite cleanse.

NHV Plantaeris: One of the main symptoms of Giardia is diarrhea and gastro upset. Plantaeris helps reduce pain and spasm of the digestive tract and helps maintain normal bowel function. It has soothing properties to help with the discomfort associated with diarrhea and excessive gas within the digestive tract. This herbal formula exhibits a broad spectrum of antibiotic activity and helps block the adherence of microorganisms to the host.

Stimmune is a herbal formula that supports the immune system and is especially important when you are treating any kind of parasites.  The immune system can become compromised when your pet is dealing with parasites and our herbal supplement, stimmune, will boost your pet’s immune system as well as providing overall strength to the body to fight infections.  It also offers antimicrobial and antiparasitic support to the body as a whole.

Do you think your pet may have Giardia or some other parasite. Please contact our NHV Pet Experts via on-line chat, email, or on our social media for any questions.