Hyperaldosteronism is a disease caused by a dysfunction in the adrenal gland and it affects more middle-aged to older cats than dogs.

Wait, but what is the adrenal gland?

They are two small glands that are located on the top of each kidney. They produce hormones that support vital functions like regulation of metabolism, blood pressure, immune system and response to stress. The hormones it produces are cortisol, also known as a “stress hormone” and aldosterone, a hormone that regulates the body’s levels of sodium and potassium, which are essential to maintain the balance of body fluids.

When there’s a dysfunction in the portion of those glands called “Zona Glomerulosa”, which is responsible for the secretion of aldosterone, then we have Hyperaldosteronism. 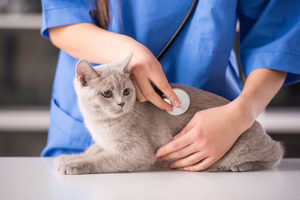 Hyperaldosteronism causes an increase of the aldosterone hormone resulting in some conditions like hypertension (high blood pressure) and hypokalemia (low concentration of potassium in blood that can lead to muscle weakness and cardiac arrhythmia).

Pet parents may realize this when their furkiddos present symptoms like:

When the disorder happens in only one of the glands and the cat is able to go to surgery, the treatment is to remove the gland. If for any reason, the surgery is not an option, medications and supplements can help normalize blood pressure and keep the dysfunction under control.

A Kitty’s Journey with Hyperaldosteronism

Pet parent Rudy left us a review on our website about how Turmeric has helped his kitty. In this case, the hyperaldosteronism resulted in a large cancerous mass in his adrenal gland. Unfortunately, his mass was “inoperable because it grew very fast and into his venae cavae. The surgeon gave him at most 6 months.” Despite the heartbreaking news, Rudy and his family did not give up hope. They decided they would do whatever they could to keep their kitty as healthy and comfortable as possible. That’s when they decided to try giving him NHV Turmeric.

Turmeric has properties that can help to reduce the high blood pressure and is a natural anti-inflammatory which can be helpful in managing the increased blood pressure. Turmeric can be really helpful not only for helping with the hyperaldosteronism but in this cat’s case, also the mass itself. Studies have shown that turmeric has anti-cancer benefits due to its antioxidant properties, in which turmeric extracts can scavenge free radicals, increase antioxidant enzymes, and inhibit lipid peroxidation. NHV Turmeric also contains black pepper to increase the bioavailability of the turmeric and also has antioxidant properties.

Rudy has been giving his cat NHV Turmeric twice a day along with prescription medications and other supplements for over 7 months now. This kitty has defied the odds and has lived longer than the original estimation his pawrents had received!

He is still going strong and his charming self. We highly recommend this product for cats with hyperaldosteronism.

We are so happy that we have been able to help this little warrior stay his adorable self. It is never easy receiving a diagnosis like this, but we are here to support you and your pet in these challenging situations.