Even after the emergency is over, the procedures have happened, and a pet has returned home, recovery can still be a hard process. We met this cute little 4-year-old floof when his parents were looking for recovery support for pets.

Puff started taking NHV supplements after going through surgery because of reoccurring urinary blockage issues — he needed support to keep him healthy during the recovery. On December 31st, 2019, Puff started to feel very uncomfortable and anxious and didn’t know where to go to use the bathroom which is not normal for him. His pawrents immediately got him to the nearest 24/7 hospital and as soon as they arrived, the doctors said he was blocked, so they put him on a catheter for 36 hours and got fluids thru him and hoped that he wouldn’t re-block after the catheter was pulled.

Unfortunately, after the doctors pulled the catheter Puff re-blocked and they said they usually try to unblock a cat three times before recommending surgery. Puff’s pawrents were very concerned, seeing their furkid in that condition, but they let the doctors do the second catheter because they wanted to keep Puff alive and he was in a lot of pain.

Puff went home for the night and his pawrents watched over him closely and made sure he was using the bathroom when he tried to. About 12 hours later, he seemed to be very uncomfortable again and was taken to a recommended vet.

We let them know the entire situation and they were able to help him empty his bladder easily with no pain. They gave us pain medicine to help with him trying to use the bathroom on his own. We got him home for another 12 hours and he had seemed to still be blocked.

Puff was taken back to the hospital and had surgery done to remove the blockage in his urinary system. 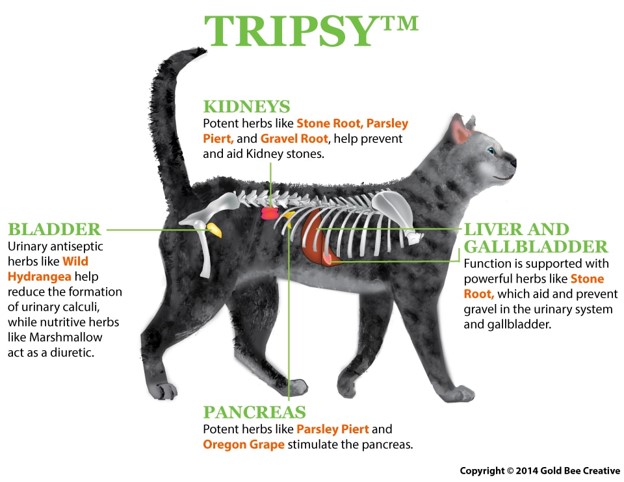 Almost 3 weeks into his recovery, Puff is doing amazing! He was very stressed and moving around a lot which isn’t great for healing between his legs. He ran out of prescribed medicine and his pawrents decided to start giving him herbal supplements to support his body through recovery.

Now since we have put this in his food he has relaxed about wearing the cone on his head so he can’t bite or lick his wound. He has also felt very relaxed and loves to kneed in his blankets.

Tripsy is our main supplement for kidney health and urinary tract disorders. It helps to keep a healthy urinary tract, including the kidneys, bladder and the pathways in between them. An all-natural anti-inflammatory, Tripsy also helps with the breakdown of kidney stones and crystals, easing painful urination and other symptoms.

We are so happy to help kitties like Puff. Message us to learn more about how Tripsy can help kitties with crystals like our handsome guy, Puff.