Our kitties are complex little creatures, capable of a wonderful depth of emotion. Unfortunately, they can sometimes (just like the rest of us) get a little stressed out, which causes themselves and their pet parents grief.

In fact, stress in cats is in all too common scenario for our little feline friends. It can, if not treated, lead to other illness and immune suppression. Common signs of cat stress include: urinating outside the litter box, digestive issues (like diarrhea or constipation), excessive grooming or scratching, hiding or isolation, excessive vocalization, decreases in appetite, increased sleeping, and aggression. It’s important to not self diagnose, as any of the above symptoms may be clues to an underlying medical condition—please see a vet if you pet is exhibiting a behavioural change.

Snowflake, a ten-year-old fluffy Ragdoll cat had a lot of cause to be stressed. Her dog-brother had been adopted out to a close family relative, her family had just had a human baby, and just like that she was usurped from her role as princess. Little Snowflake herself was also soon adopted out to another family member. The home she knew as kitten and her life as an outdoor/indoor cat was gone, and she became solely an indoor cat in a much smaller apartment. In Snowflake’s mind, “life sucked!” and she was going to tell the world just how much it did.

When Snowflake’s new mom came to NHV, she was at her wit’s end. Snowflake’s excessive cat vocalizations were so loud and constant that it actually became a possibility that she would be evicted from their apartment. We advised Snowflake’s mom to take Snowflake to the vet to rule out any underlying conditions, just in case.

Snowflake’s blood work came back normal. We then suggested she try NHV Matricalm, and boy are we glad we did. Snowflake’s vocalizations have mostly ceased, she’s happier, and much more well adjusted. Here’s what Snowflake’s mom had to say:

* “Thank you so much for suggesting Matricalm. It worked surprisingly fast! I would say within a couple of days. She doesn’t like it being squirted into her mouth. It’s a bit strange because when I squirt it into her mouth, she actually began foaming (which the vet informed me was because she didn’t like the taste). But when I soak it into her kibble, she’s totally fine with it. There’s usually a bit of supplement in her bowl in liquid form, and she’ll lick that up happily too. I think it just needs to be on her own terms!

The second night I gave her the Matricalm, she was super quiet. So quiet that I actually woke up worried in the middle of night and had to go check on her. LOL! She was fine of course. I thought it would calm her down so much that she wouldn’t be herself, but that hasn’t been the case at all. She doesn’t vocalize, but she actually seems much more content. She’s social, she plays…she’s happy.

After a while I did stop using the Matricalm—I guess I thought she was “cured”. She was good for a couple of weeks, but then she started vocalizing again. I’ve decided to continue with the therapeutic dosage. Thank you again for your help! I can finally sleep!!” 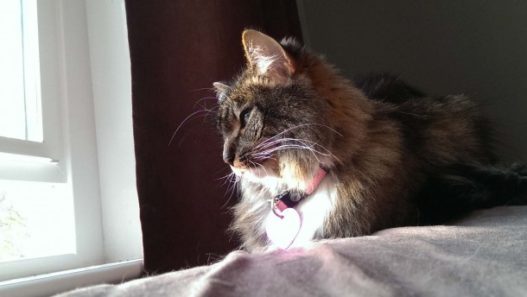